Response to the President’s comparison to European growth rates

Over the last five years, our economy has recovered faster and stronger from the worst financial crisis and economic crisis since the Great Depression, better than any other developed country on Earth.

President Obama’s is drawing on the Economic Report of the President released by his Council of Economic Advisers on Monday. Here is the relevant chart, showing the U.S. at a higher relative GDP level than the major European economies, with 2007 as the starting point for the comparison. 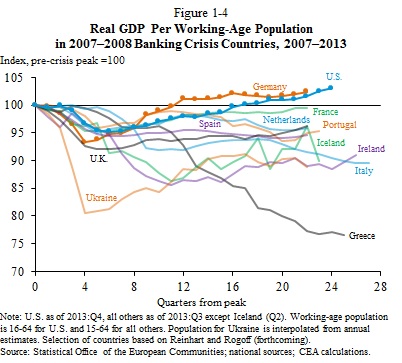 Here is the CEA’s accompanying text:

[A]mong the 12 countries that experienced a systemic financial crisis in 2007 and 2008, the United States is one of just two in which output per working-age person has returned to pre-crisis levels. The fact that the United States has been one of the best performing economies in the wake of the crisis supports the view that the full set of policy responses in the United States made a major difference in averting a substantially worse outcome—although it in no way changes the fact that more work remains to be done.

(Technical note: “GDP per working-age population” is weird. I wonder what this same comparison with the more conventional “GDP per capita” looks like.)

I think the President’s statement, that the U.S. economy has recovered more rapidly than other major developing economies, is technically correct. But it’s a sad thing to boast about, it’s not a meaningful measure, it’s not the standard we should use, and it doesn’t support the argument that U.S. policies made a major difference in averting a substantially worse outcome.