Comparing the Ryan and Obama deficits to Bowles-Simpson

Here is the series so far:

Yesterday I showed you the long term deficit and debt paths for both Chairman Ryan’s and President Obama’s budgets.

Today will be easy. I’m just going to add the Bowles-Simpson long-term deficits in the mix.

Although Messrs. Bowles and Simpson failed to get the 14 of 18 vote supermajority the President required of them, I maintain that they succeeded.  They build a bipartisan plan that would have significantly reduced future budget deficits and that quite surprisingly had support from Senate Democratic Whip Durbin (D-IL),Senate Budget Committee Chairman Kent Conrad (D), the then-ranking Democrat on the House Budget Committee, John Spratt, and Republican Senators Coburn, Crapo, and Gregg.

The President did nothing with the recommendations of this commission that he created.

Here are the long term deficit paths from yesterday with one addition: the Bowles-Simpson recommendations are a new purple line. 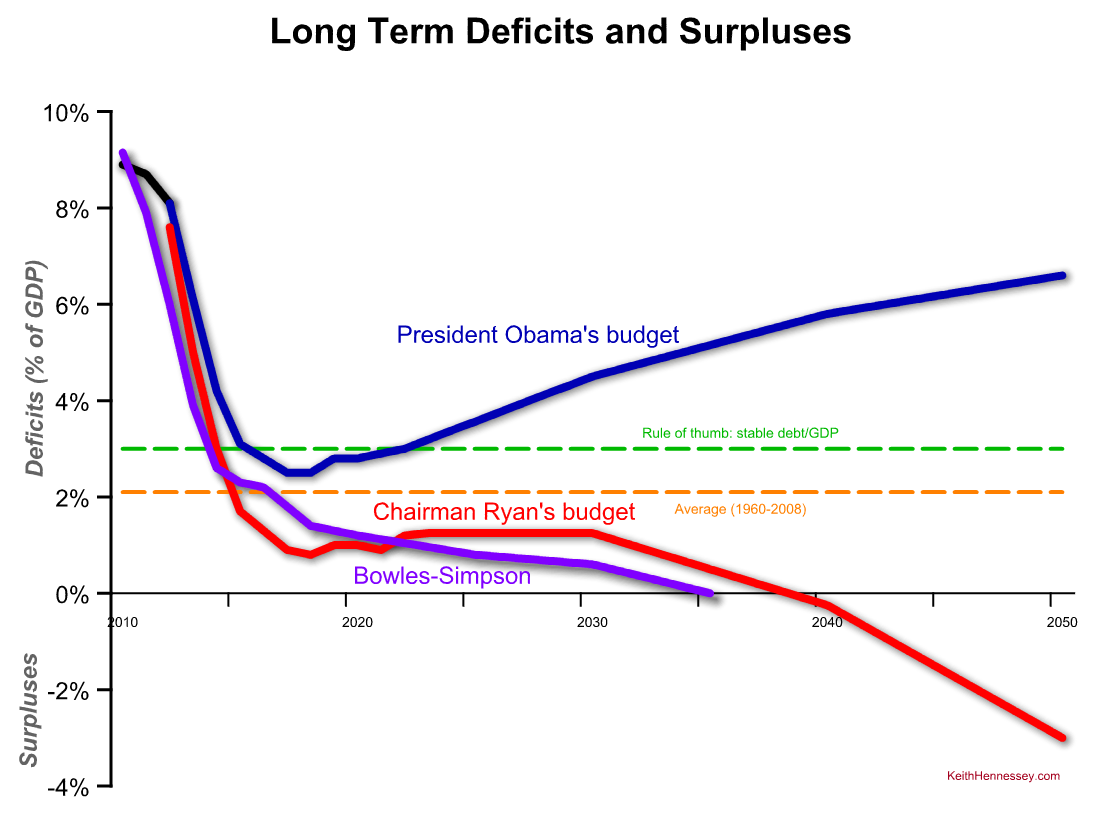 The long-term deficit story is fairly clear.  You can see that the purple line ends up below the red line and the two track closely together.  Bowles-Simpson is therefore slightly more aggressive on deficit reduction than the Ryan budget in the long run.  Bowles-Simpson and Ryan have quite similar deficit paths, both of which are sustainable in the long run and are therefore quite different from the President’s proposed long run path.

Having similar deficit paths is not enough for us to adequately compare the Ryan and Bowles-Simpson plans.  To do that at a minimum we need to look at the gross spending and revenue components of each plan.  We’ll get to that next week.

For now we can draw two conclusions by adding the Bowles-Simpson plan to this graph: