Comparing the Ryan and Obama long-term deficits and debt

In case you missed it here are the earlier posts in this series:

There is uncertainty in every budget projection, and every projection requires making certain assumptions.  The longer your timeframe the more your projection is vulnerable to those uncertainties and assumptions.  In addition the policy specificity in both plans declines significantly after 10 years.

Despite all these caveats, it makes sense to look at long run projections.  Yes, they are inaccurate, and yes, things will change in both the economy and policy.  But that’s no reason to ignore our best guess/estimate of what trends each leaders is proposing.  As long as we don’t assign too much false precision to multi-decade projections we can still draw valuable conclusions from these long-term estimates.

Here is the long-term deficit comparison.

I am using each advocate’s claims about their long-term projections. The impartial referee has not scored the policy effects of either proposal beyond 10 years, so we have to rely on the advocates’ claims.

Would we reach a 3% surplus in 2050 if the Ryan budget were enacted in full?  Certainly not.  Would we hit a 6% deficit in that same year under the President’s budget?  No.  At 40 years out, each is little more than an educated guess.

But the long term lessons of this graph are not guesses.

Now let’s look at long-term debt. Debt is, of course, the accumulation of annual deficits and occasionally surpluses. Deficits measure an annual flow while debt measures a stock. 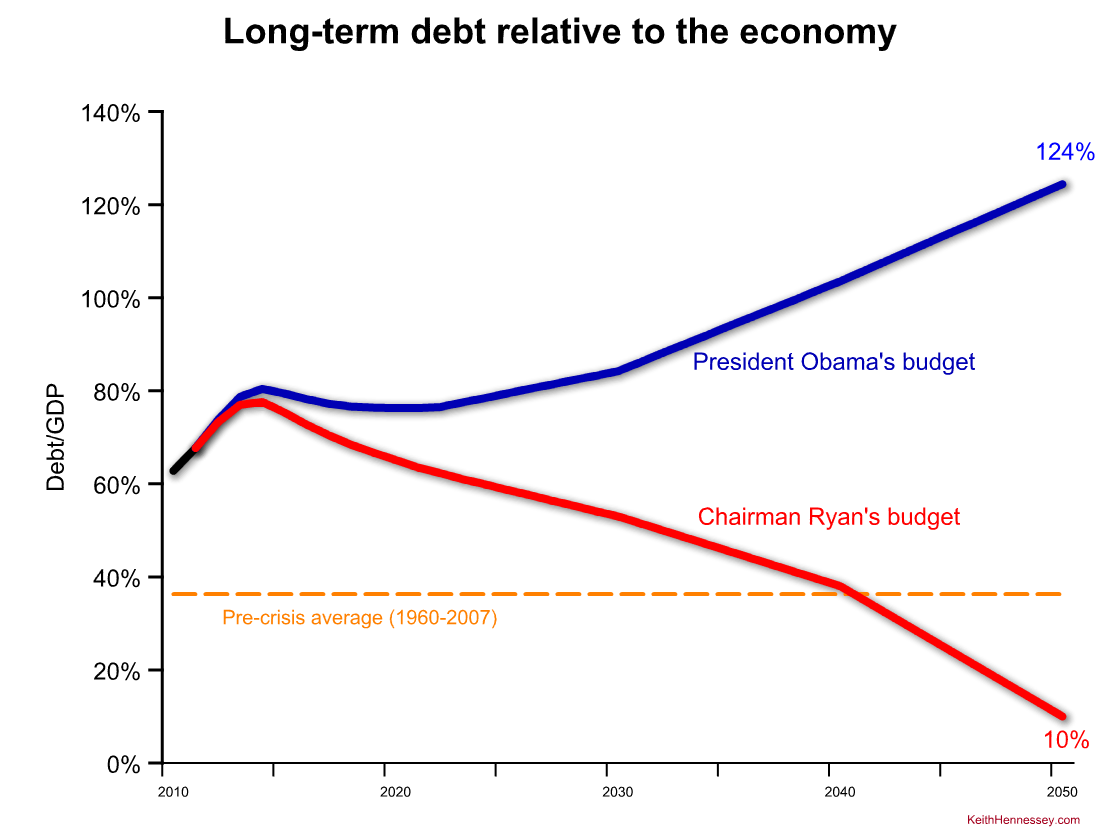 The divergent paths are even clearer here. Under both plans debt/GDP would increase this year and next, then begin to decline.

Chairman Ryan’s plan would result in debt/GDP steadily declining over time. It would take decades to return to a pre-crisis average.

President Obama’s plan would result in debt/GDP stabilizing by the end of this decade, then steadily and forever growing. At some point, and no one knows when, that debt becomes unsustainable.

Again, please don’t get too wrapped up in the point estimates I have shown for each plan for 2050.  The point is that the Obama debt would eventually break 100% of GDP and keep climbing, and the Ryan debt would steadily decline over time.  The gap between the two is significant and ever-increasing.

The red path is economically sustainable, the blue path is not.