Why is American oil production up?

Correction:  Silly me, I assumed that shale oil and oil shale were the same thing.  They are not.  The technology improvements in fracking refer to shale oil, which is different than oil shale.  I have modified the post below to use the unambiguous and clearer term

[light] tight oil
.  Thanks to a friend for setting me straight.

Here is President Obama, speaking about energy yesterday in Maryland:

The President is right – oil production has climbed steadily and significantly since 2007.  This helpful graph from the Energy Information Administration shows us why. 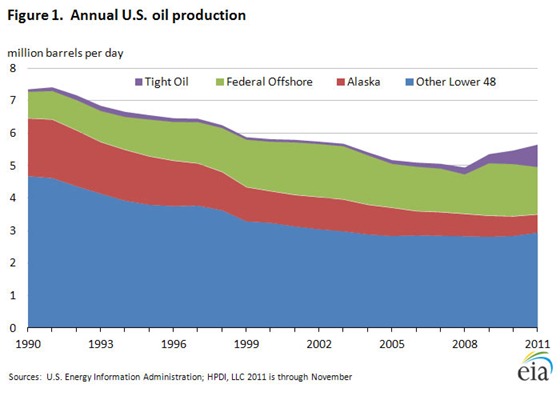 The surge comes almost entirely from a big increase in the production of light tight oil.

The two big tight oil plays are known as the Bakken formation in North Dakota and Montana and the Eagle Ford in south Texas. According to EIA these two accounted for 84 percent of tight oil production in November 2011. Bakken is bigger than Eagle Ford but Eagle Ford’s production is growing more rapidly.

The President’s rig count statement is also true, and for the same reason.  Oil rigs have surged in the past few years, again to produce light tight oil .

This increased oil production is not the result of policy decisions by the Obama Administration but instead the result of recent improvements in oil exploration technology, specifically the ability to extract light tight oil using fracking.

The only case in which they exaggerate is this graph that they use quite often. 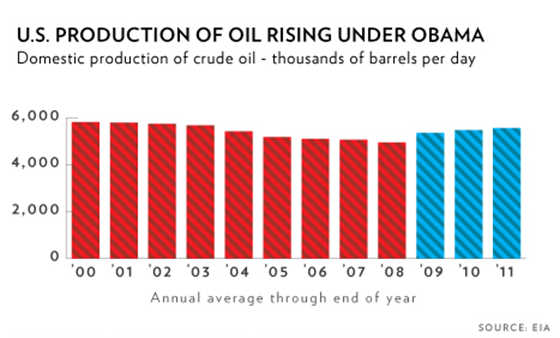 The red vs. blue shading misleads you into concluding that a policy decision by President Obama resulted in an increase in U.S. oil production, while the graph title merely claims that production is rising “under Obama.”  You can be sure that if it was “because of Obama” they would have said that.

It’s also interesting that the Administration seems to be avoiding

Domestic oil production in the U.S. has increased over the past three years and should continue doing so in the near future.  That is good news.  This good news results from improvements in oil production technology, not from President Obama’s policies.