I find I can learn a lot by graphically examining legislative voting patterns. The recent enactment of implementing legislation for three Free Trade Agreements gives us a wonderful opportunity to compare the two political parties and the House and Senate on free trade.

The Bush Administration negotiated free trade agreements (FTAs) with Korea, Colombia, and Panama.  South Korea’s economy is big enough that the Korea FTA was economically important not just for South Korea, but also for the U.S. FTAs with smaller Colombia and Panama are important to the U.S. for several non-economic reasons:

Upon taking office President Obama said all three FTAs were flawed and sent his trade representative to renegotiate each one.  Even after renegotiations concluded in late 2010, the President sat on them for many months.  He sent implementing legislation for all three agreements to Congress in October of this year.  All three were ratified by Congress in less than three weeks.

The two years of renegotiations were politically convenient for President Obama, as they allowed him to avoid asking Speaker Pelosi to bring up legislation that most of her caucus opposed.  The following vote analysis will show this.

Since I want to focus principally on comparing the two parties, I think that looking at partisan support ratios for the FTAs.

I found that looking at raw vote counts gets klunky.  Look at how much easier it is when we compare ratios and have an apples-to-apples comparison of different groupings:

Even better, we can look at it as a graph: 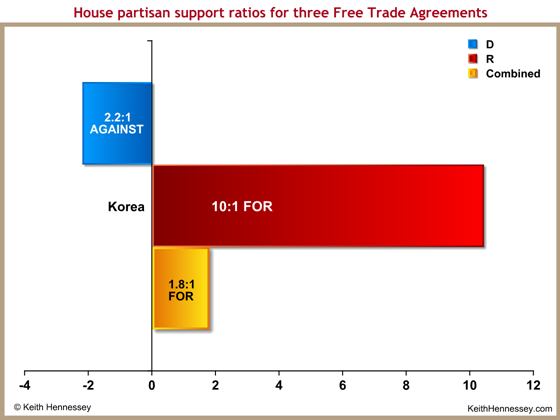 Obviously, an FTA would pass the House only if its total support ratio (Rs+Ds) is greater than 1:1.

Now this voting pattern is not unusual for the House on any legislation.  As a majoritarian body, the House is naturally partisan. Bills usually pass the House relying mostly if not entirely on the majority party’s votes.  We can see that this is the case for all three FTAs in October: 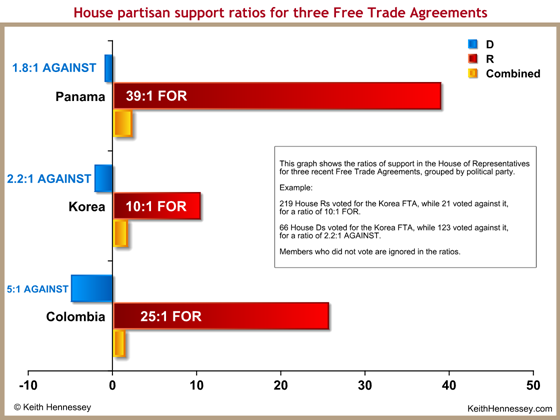 We can learn a few things from this graph:

Now let’s test these hypotheses by looking at the corresponding Senate votes: 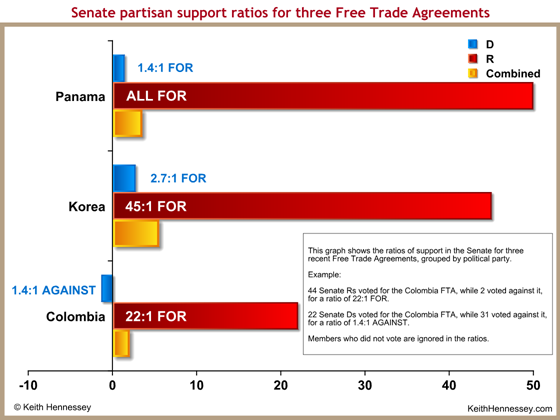 This is more interesting than the House vote.  Remember that Democrats are still in the majority in the Senate.

I also did some aggregate tabulations, combining the votes of all three FTAs together.  This is useful for comparing the political parties in the aggregate.  It also gives more weight to the House than the Senate, since there are more House members than Senators. 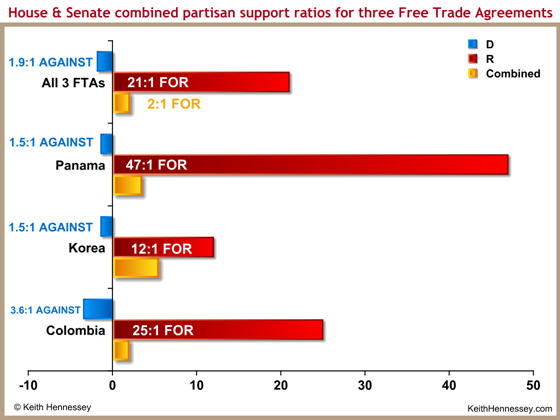 These results won’t surprise anyone who has followed trade policy and politics in the U.S.

Can we extend the results from these three FTAs to a broader analysis of the two parties on free trade?  Yes and no.

Free trade in the U.S. results from a center-right legislative alliance.