What is the goal of the President’s Fiscal Commission?

The Administration supports the creation of a Fiscal Commission. The Fiscal Commission is charged with identifying policies to improve the fiscal situation in the medium term and to achieve fiscal sustainability over the long run. Specifically, the Commission is charged with balancing the budget excluding interest payments on the debt by 2015. The result is projected to stabilize the debt-to-GDP ratio at an acceptable level once the economy recovers. The magnitude and timing of the policy measures necessary to achieve this goal are subject to considerable uncertainty and will depend on the evolution of the economy. In addition, the Commission will examine policies to meaningfully improve the long-run fiscal outlook, including changes to address the growth of entitlement spending and the gap between the projected revenues and expenditures of the Federal Government.

The President therefore defines the Commission’s short-term job as “balancing the budget excluding interest payments on the debt by 2015.”

This means the President’s goal is to run a budget deficit in 2015 that does not exceed the amount the government will spend on interest in that year. This is not a balanced budget goal. It’s a deficit reduction goal that falls far short of balance. The Administration is using clever language to make it sound like a balanced budget goal.

Now we need to do three things:

Step 1: How much will the government spend on interest in 2015?

Nothing is easy in budget-world. It turns out there are three different answers to this question. When CBO scores the President’s budget there will be four.

This allows us to build the following table.

CBO will come up with a different score of the President’s policies in a month or so when they rescore the President’s Budget. For now let’s use $571 B / 3.0% of GDP as the target.

Step 2: How big of a gap would the President’s Commission need to close?

The interesting part is that the specific policies in his last year’s budget would have met the goal President Obama now proposes to establish for the Fiscal Commission. One year ago the President said his policies would result in a 2.9% deficit ($528 B) in 2015 (Table S-1), which would meet the President’s new target. In other words, the goal of the new Fiscal Commission is to propose additional deficit-reducing policy changes to close the additional deficit gap opened between last year’s Obama budget and this year’s Obama budget. Some of this gap is the result of a weaker economy, and the rest is because the President is proposing more spending than he proposed last year.

Step 3: Calculate what the President defines to be an “acceptable level” of debt

The President’s Budget tells us that his specific policies would result in a debt-to-GDP ratio of 72.9% in 2015, with a 3.9% deficit in that year, 0.9 percentage points short of the Commission’s target. I presume that a Commission would phase their changes in over the next five years, resulting in smaller deficits than those proposed by the President between now and 2015. Eyeballing Table S-1, the President is defining 71-72% of GDP as an acceptable level of debt. I’ll be pick the midpoint and assume a successful Commission stabilizes debt-to-GDP at 71.5%. The Budget creates a little fudge room this with “The magnitude and timing of the policy measures necessary to achieve this goal are subject to considerable uncertainty and will depend on the evolution of the economy.” 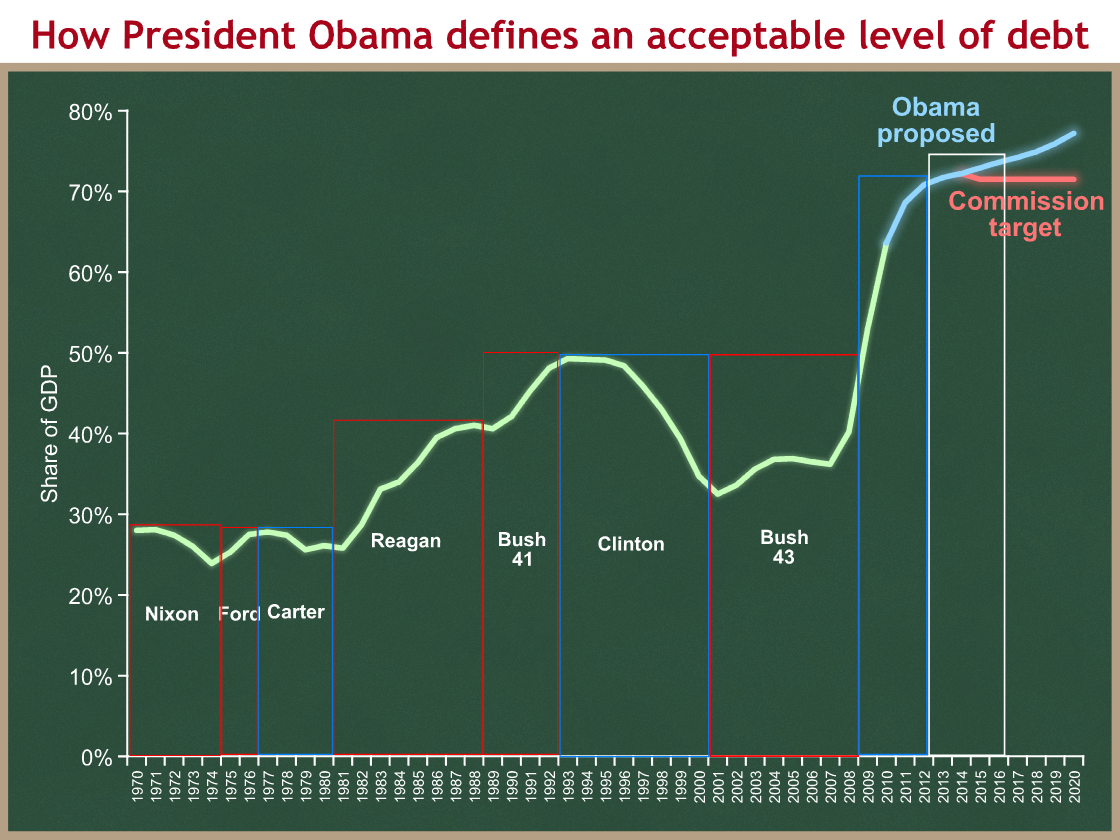