Today the Administration released more detail for the President’s budget. The President tried to emphasize his fiscal responsibility by highlighting some of the programs he proposes to terminate or reduce. Budget Director Orszag released the Terminations, Reductions, and Savings volume.

This morning the President said,

That’s why I’ve charged the Office of Management and Budget, led by Peter Orszag and Rob Nabors who are standing behind me today, with going through the budget — program by program, item by item, line by line — looking for areas where we can save taxpayer dollars.

Today, the budget office is releasing the first report in this process: a list of more than 100 programs slated to be reduced or eliminated altogether. And the process is ongoing.

Here is a comparison of the budgetary savings from President Obama’s proposed discretionary program terminations and reductions, compared to those proposed by President Bush in his last budget: 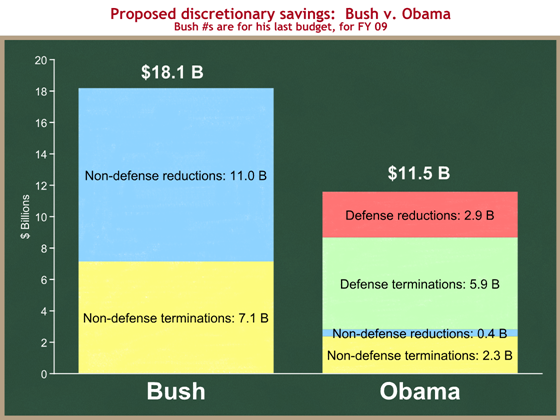 Now this graph covers only the proposed savings from annually appropriated (“discretionary”) programs. The bulk of federal spending is in the mandatory programs. I will cover that separately.

Today the President said, “But these savings, large and small, add up.” It’s too bad they don’t add up to more.