How many uninsured people need additional help from taxpayers?

When discussing health insurance we frequently hear that there are “46 million uninsured” in America. This figure is from a monthly survey of about 50,000 households done by the Bureau of Labor Statistics and the Census Bureau. This Current Population Survey (CPS) then uses statistical techniques to paint a picture of the entire U.S. population.

Advocates for expanding taxpayer-subsidized health insurance, and their allies in the press, repeat this 46 million number constantly. It paints the following technically accurate but misleading picture: 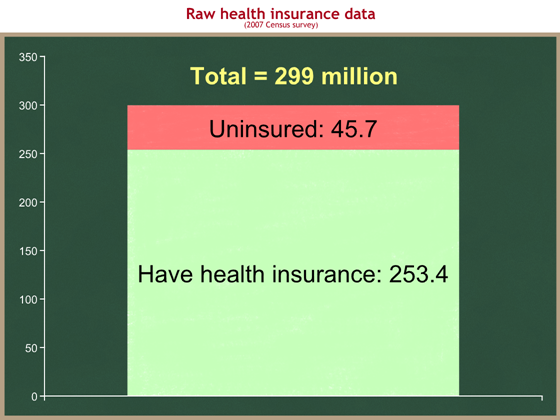 This looks really bad. At least there are more than 250 million people with health insurance – that is clearly a good thing that we never hear it in the press. Still, there’s a lot of red there. It means that in 2007 (15%) of Americans lacked health insurance, according to the CPS. Advocates, some elected officials, and the press round that number up to “1 in 6 Americans.” We hear that there are “46 million uninsured,” and then we jump to the conclusion that government needs to help 46 million people buy health insurance, subsidized by taxpayers.

Let’s look inside that 45.7 million number and see what we can learn. Here is our key graph: 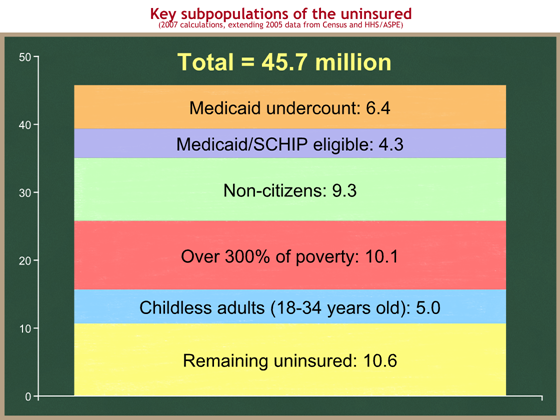 First, I need to make a technical disclaimer. I had this same detailed breakdown for 2005 data, done by health experts when I was part of the Bush Administration. I now have a 2007 total (45.7 million), and so I have proportionately adjusted the components to match that new total. It is a back-of-the-envelope calculation, but I am confident that it is solid, and it does not move any component by more than two hundred thousand. In addition, the expert analysis I am using ensures that the subdivisions shown above do not overlap. I will slightly oversimplify that point in the following description of the breakdown to make the explanation readable.

Let us walk through the graph from top to bottom.

As a policy matter, we care not about the total number of uninsured, but about the subset of that group that we think “deserves” taxpayer-subsidized health insurance. That is a judgment call that involves some value choices.

I will make one value choice for you and boldly assert that, if you are already enrolled in or eligible for one free or heavily subsidized health insurance program, we can rule you out as needing a second. That simple statement reduces the 45.7 million number down to 35 million, by excluding the Medicaid undercount and Medicaid/SCHIP eligible from our potential target population.

I think most people would also say that the 10.6 million I have labeled as “remaining uninsured” and shaded in yellow above are the most sympathetic target population.

It then gets tricky.

There is no clear right or wrong answer to the above questions. You need to make your own value choices for them.

Now let us look at the effects on the totals for several hypothetical answers to these questions. Remember that the advocates, some elected officials, and press tell us that the numbers are: 46 million uninsured, 15% of the population, and 1 in 6 Americans “are uninsured.” I suggest you try to figure out which of the following is closest to your view.

These are, of course, not the only possible answers, but I think they are a representative bunch. Even for the most “liberal” set of answers (Ann’s), the headline numbers we hear in the press overstate the extent of the problem by more than 10 million people.

Now even Edie’s narrowest 10.6 million target population is still a lot of people who lack health insurance. So why does it matter that the press gets the numbers wrong?

When you hear “46 million uninsured,” or “1 in 6 Americans don’t have health insurance,” remember that this is technically correct but misleading. The more important question is, “How many uninsured people need additional help from taxpayers?”