Some have been arguing that the growth package should extend the availability of unemployment insurance (UI) benefits.

Special thanks go to Dr. Edward Lazear and his team at the Council of Economic Advisers for the first and third points. p.s. Eddie is a labor economist.

Unemployment benefits have never been extended before a recession. Almost all periods of extended benefits occurred after the conclusion of a recession. Twice extensions were initiated 12 months into a recession (1975 and 1982). And of course, our economy is now growing, albeit slowly.

Some (including, unfortunately, the Congressional Budget Office) have blurred the distinction between when UI and rebates begin, and when the actual increase in GDP would occur. The press has repeated the incorrect assertion that “unemployment benefits would affect the economy more rapidly than tax rebates.”

While UI checks would start sooner than rebate checks, the vast majority of the cash out the door, and therefore the GDP effect, would occur much earlier from rebate checks than from extending unemployment insurance.

The logic is quite simple.

This graph shows the cumulative cash out the door, comparing rebate checks and unemployment insurance. The first thing to notice is the difference in magnitude — UI benefits affect fewer people than broad-based tax rebates, so the total amount of dollars going out the door is much smaller, and therefore the economic benefit is smaller.

But the main point is that, while UI benefits would begin in late March and rebate checks not until about mid-May, the checks are concentrated into about a 7-week window. Once that’s done (say, by the end of June), the whole $100B of rebate checks are out the door and into the economy. The UI benefits grow much more slowly, as people “age into” their extended benefits by hitting the 26-week threshold. 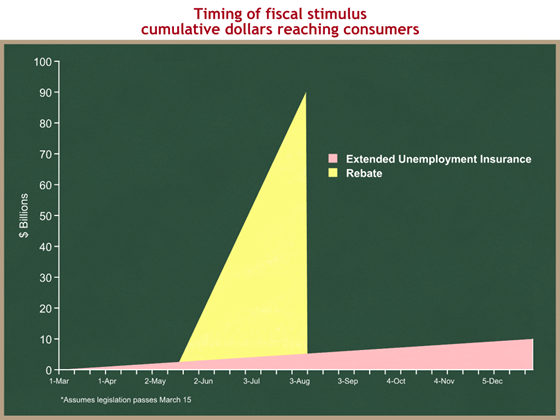 Under current law you’re eligible for 26 weeks of unemployment insurance. The most frequently discussed proposal is to extend that for another 26 weeks, to a full year.

Some find it implausible to suggest that some people would choose to remain unemployed because they don’t want to lose their unemployment insurance. But the numbers don’t lie. Look at the dramatic increase in the percentage of workers who find a job in week 26, right before their UI benefits run out. 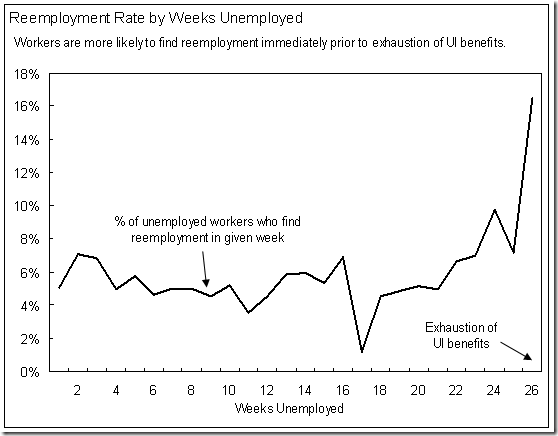 In fact, according to two economists from the Clinton Administration, extending UI benefits by 13 weeks increases the duration of the typical spell of unemployment by one to two weeks. (Card and Levine, 2000; Katz and Meyer 1990)

So if you extend UI benefits, you will increase the duration of the typical spell of unemployment. Fewer people will have jobs, and economic growth will be slower. While we’re reticent to put an exact number on this effect, the numbers are significant enough that it could counteract much of the benefits of the House-passed growth package.