Here’s an excerpt from Agriculture Secretary Mike Johanns’ remarks to the Tennessee Farm Bureau Federation in Nashville on August 9th.

Now you’re looking at that map and you’re saying to yourself, Mike, you’re the Secretary of Agriculture, and you’re supposed to be talking about agriculture and that looks like a map of a city. It is a map of a city. In fact that’s a map of Manhattan in New York City. But I can be even more specific. One of those streets on the right-hand side of that map is Park Avenue. Now if you’ve ever had an opportunity to visit that part of the world, these folks live in very, very expensive housing. Let me put it that way. This is some of the most expensive property anywhere worldwide, certainly in the United States. What are all those dots? People who are receiving farm subsidy payments under the Farm Bill. 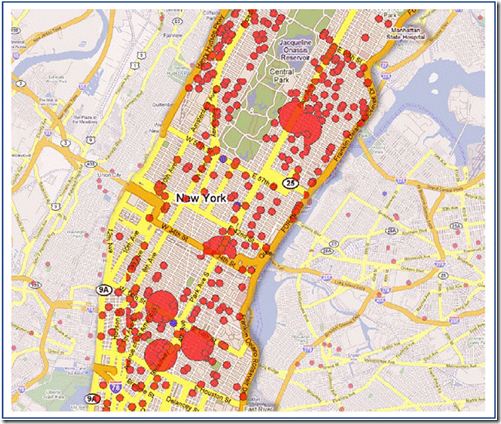 What are those big dots where it looked like somebody’s red ink pen bled? Those are people receiving over a quarter million dollars annually.

Now ladies and gentlemen, there isn’t a person, a farmer in America and I think I know them because I grew up with them and I’ve been around farmers my whole life that believes that’s what should be happening with our farm programs. And I’ll go even further. I believe America supports our farmers, but we have to make the case whether we’re in town or in the country that these programs make sense, that they are a wise federal policy and a good investment for food security and now fuel security.

And I feel strongly we can make that case. But I also feel strongly we’ve got to deal with these kinds of issues or we’ll lose support for what we’re doing. And so that’s why we have worked to try to figure out the best approach to dealing with this payment limit issue.

We should not be giving farm subsidy payments to upper-income residents of Manhattan. This is one of several reasons why we argue that the next Farm Bill needs more reform than the House-passed farm bill. And it’s a reason why we shouldn’t continue current law by extending the Farm bill.