The President spoke about the budget yesterday when we released the Mid-Session Review, the summer update of the budget numbers.

Here’s the least you need to know:

The mid-session review is important. It lets the American people know how we’re doing in meeting what we call fiscal goals. And this year the message is unmistakable. America’s economy keeps growing, government revenues keep going up, the budget deficit keeps going down — and we’ve done it all without raising your taxes.

More importantly, the size of the deficit is down to only 1.5 percent of America’s economy. One way to be able to measure how we’re doing with the deficit relative to other years is to measure it as a percentage of GDP. We’re estimated to be at 1.5 percent of GDP. That’s well below the average of the last 40 years. We’ve achieved all this deficit reduction without once raising the taxes on the American people. 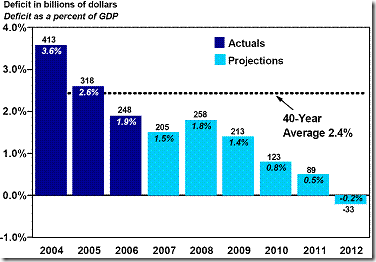