What can President Obama learn from President Bush’s bipartisan successes?

Conventional wisdom says the tenure of President George W. Bush was dominated by partisanship. There were deep partisan splits over the war in Iraq, enhanced interrogation, wiretapping, the 2003 tax cuts, and Social Security reform.

Each of the following major laws was enacted on a bipartisan vote:

President Bush also reached across party lines to reform immigration law. His bipartisan outreach on this issue was successful, but the legislation failed due to opposition from both wings. In that effort President Bush’s team negotiated with a broad group in the Senate, led by Senator Kennedy on the left and Senator Kyl on the right. President Bush’s attempts deeply split his own party, yet he persisted until it became apparent there was not a 60 vote coalition to succeed.

Let’s begin with the 2001 tax cuts to orient ourselves to the graph format. 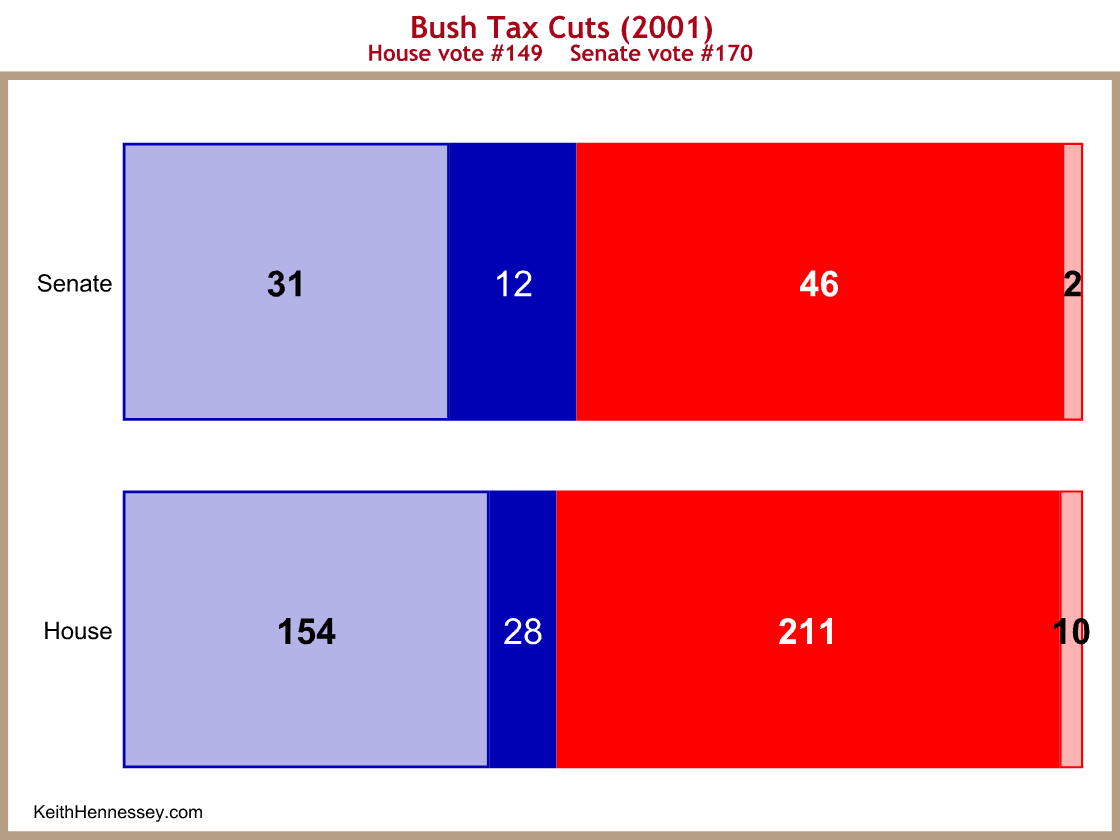 It should be fairly easy to see that the 2001 tax cuts were enacted by a center-right coalition. Almost all Republicans supported the final product, and about 1 in 4 (Senate) or 1 in 6 (House) Democrats voted aye.

This bill was bipartisan largely because the Bush White House, Senate Majority Leader Lott and Senator Grassley worked closely with Democratic Senators Breaux and Baucus to craft a bill and keep moderate Democratic Senators onboard. We used the reconciliation process, and therefore had 58 votes when we needed only 51 for final passage in the Senate.

You can see that the 2001 tax cuts would not have had even a simple majority in the Senate if Republicans had acted alone. The Senate was split 50-50 at the time. 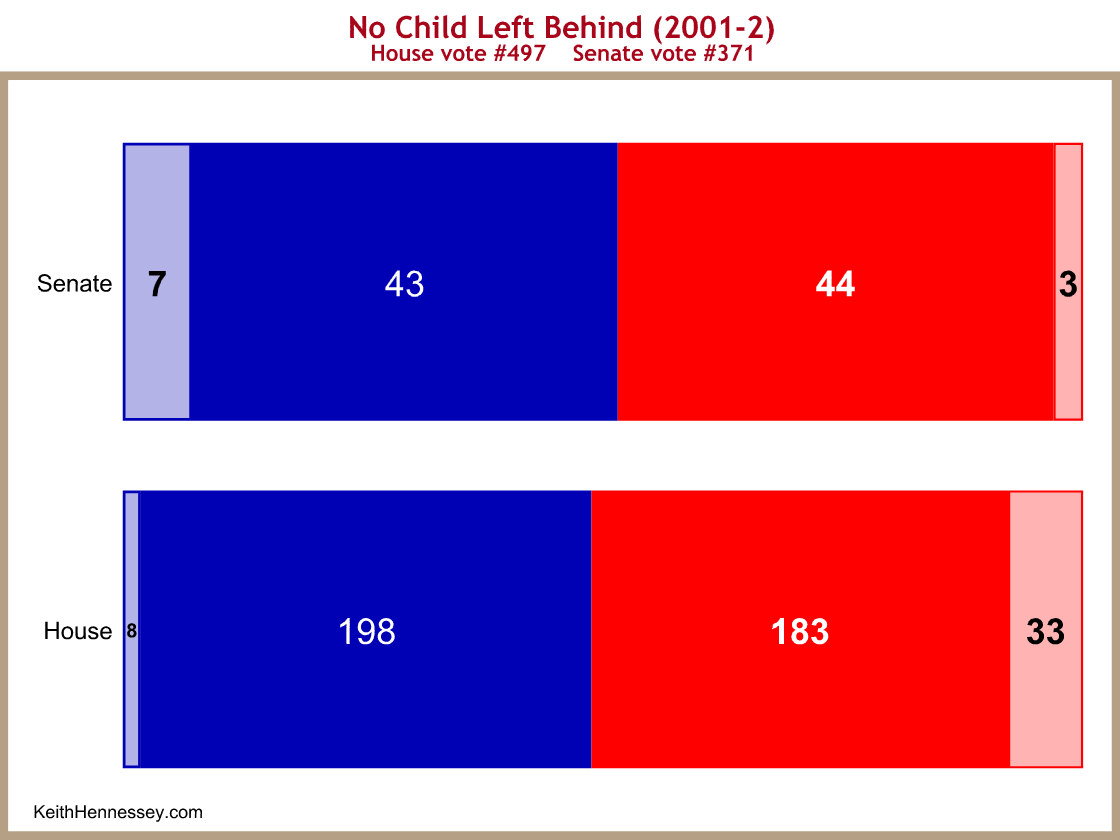 This was a broad bipartisan coalition. President Bush reached out to Senator Kennedy and instructed his team to negotiate directly with Kennedy. You can see the result. This is about as bipartisan as it gets for major legislation.

The Senate was a 51-49 Democratic majority when this bill became law. 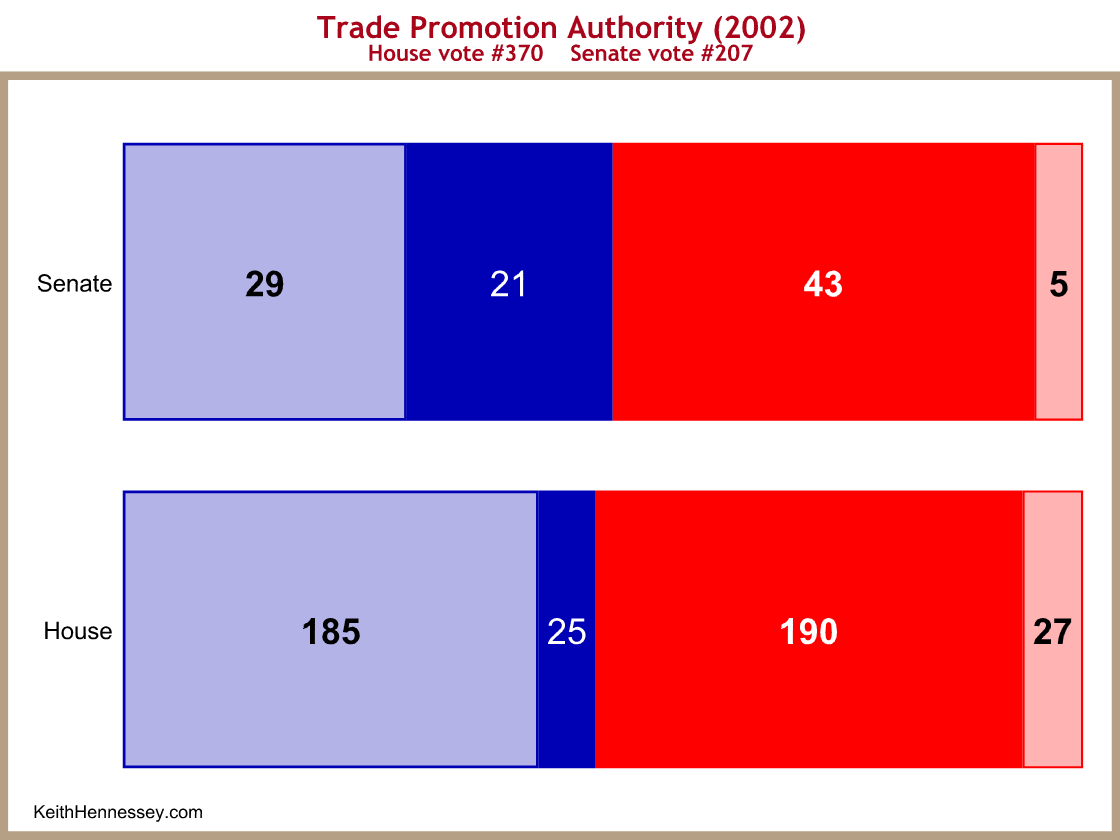 Trade Promotion Authority, formerly known as fast track, gives the President authority to negotiate trade deals with other countries and have them subject to only an up-or-down vote by Congress, rather than being amended to death. It is essential for Congress to give the President this authority if you’re to have free trade agreements.

Again you can see the center-right coalition that dominates much of American economic policymaking. This has even a little more Democratic support than the 2001 tax cuts, and slightly more opposition from protectionist Republicans. As with the 2001 tax cut, you can see that there are more economic centrist Democrats in the Senate than in the House.

This bill could not have passed either the House or the Senate with only Republican votes. A bipartisan coalition was necessary for legislative success.

This is with a 51-49 Democratic majority in the Senate.

Medicare and Health Savings Accounts are next. 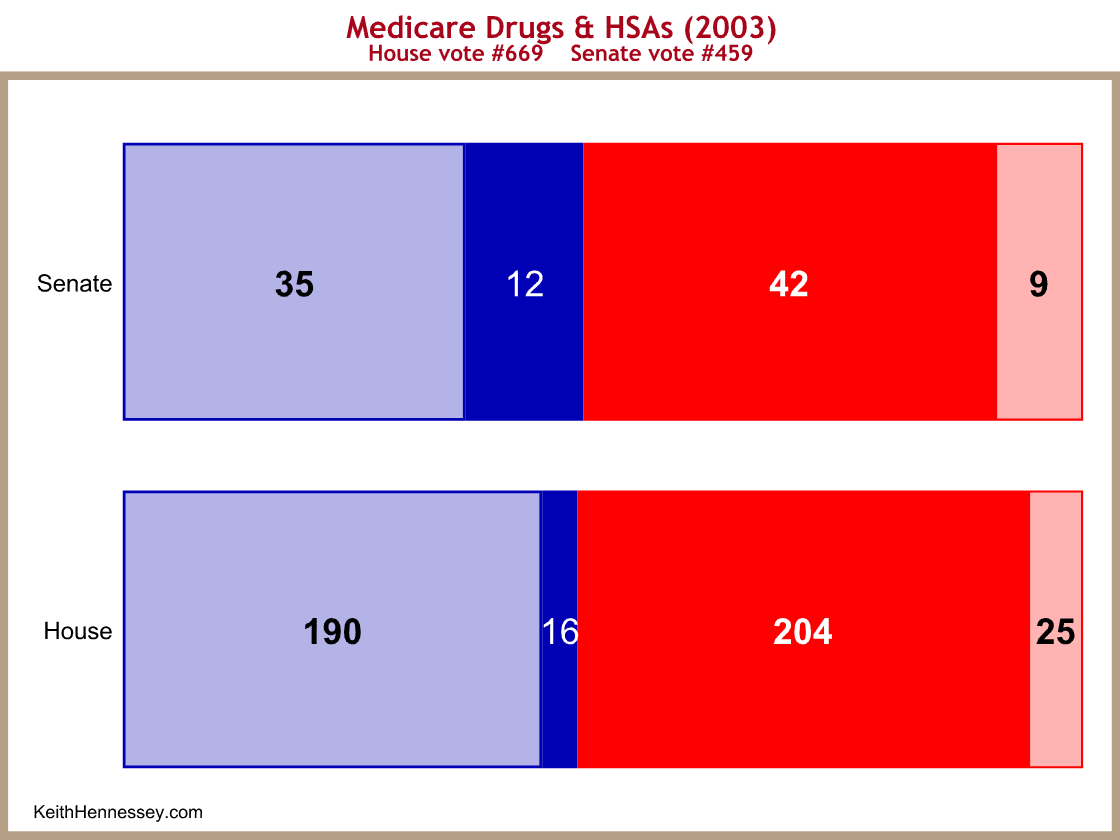 Now we’re back to a Republican majority in the Senate.

Once again, President Bush, his team, and Senator Grassley worked closely with centrist Democratic Senators Baucus and Breaux to negotiate a deal. The final details were hammered out in a fierce negotiation between Baucus/Breaux and Rep. Bill Thomas (R-CA), with extensive White House support.

President Bush held a few meetings at the White House with Baucus, Breaux, and the key Republicans to strengthen the coalition and keep the ball moving forward. This bill created the Medicare drug benefit (which split Republicans) and Health Savings Accounts (which Republicans and conservatives especially like). Democratic leaders opposed this bill, but we managed to hold Democratic moderates anyway.

Once again, the winning majority coalition in both the House and Senate was bipartisan, and the bill could not have become law without Democratic support. A key vote before Senate final passage was a cloture vote, in which some of the 9 Republicans who ultimately voted no supported cloture.

Now we turn to the first major energy law during the Bush tenure. 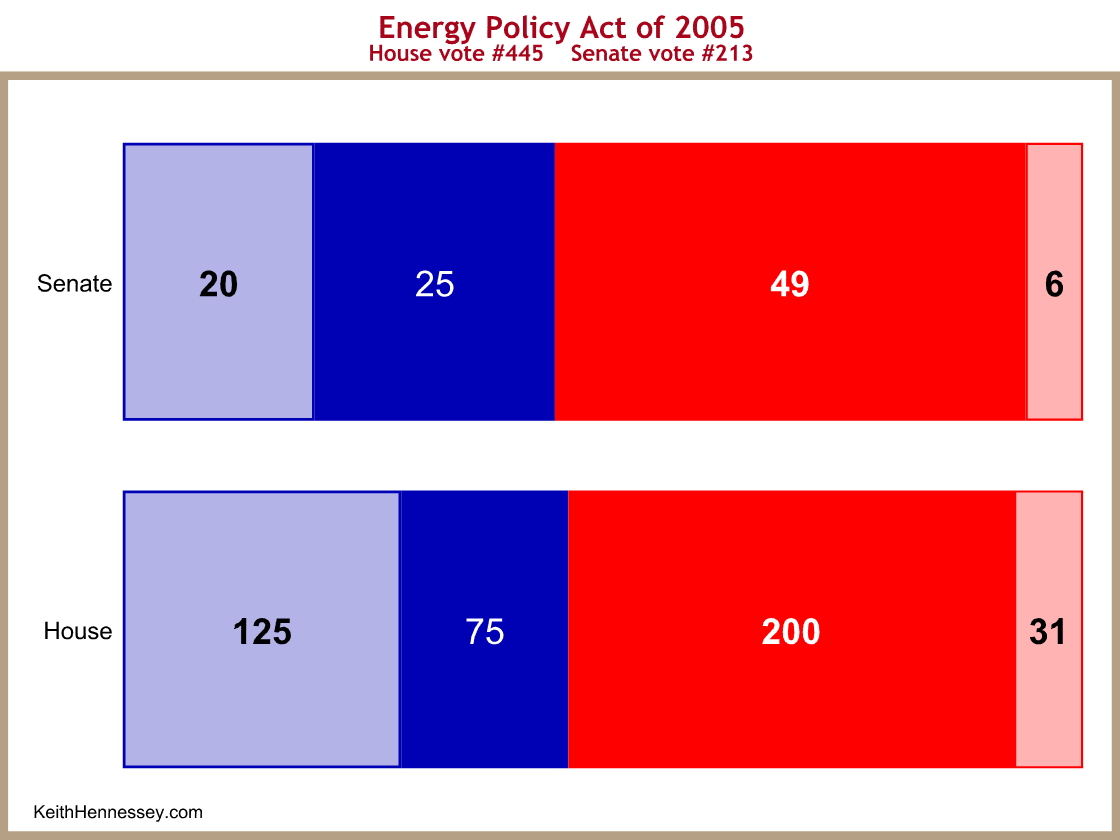 Senators Bingaman and Baucus were key to this legislative success, which you can see was more bipartisan than some of the prior successes. The legislative process was filled with amendments and negotiations across the partisan aisle and fierce regional conflicts.

Senate Democrats split roughly equally and 75 House Democrats supported final passage. This law focused on electricity (rather than fuel), which sometimes has more of a regional policy focus than a partisan split. This bill originated with VP Cheney’s Energy Task Force, which was labeled by the Left as a dark and evil conspiracy. And yet the final legislation had significant bipartisan support.

Pension reform gets less attention than the others but is important.

I highlight this law because it is easy for pension issues to break down along party lines, with Republicans favoring management interests, Democrats favoring labor interests, and the taxpayer getting shafted. Republican committee chairmen and the Bush Administration reached across party lines to elevate the interests of protecting the pension system, future retirees, and taxpayers, battling against tremendous lobbying pressure from business and labor interest groups to relax the pension rules and allow pension plans to be underfunded.

The law was far from a complete victory for good pension policy, but it was a definite improvement over what preceded. And again, you can see the tremendous breadth of bipartisan support.

Still in President Bush’s tenure, we now shift to Democratic majorities in the House and Senate. The 2007 energy law focused on fuel. 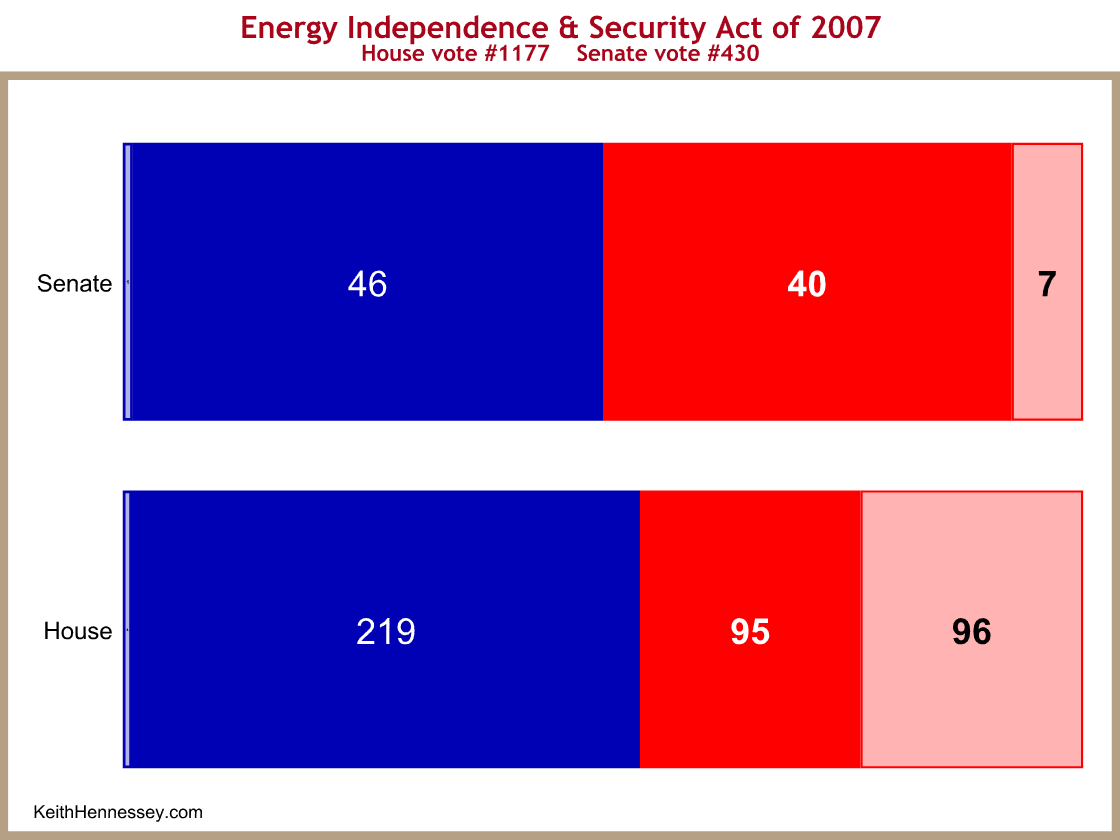 In the 2007 State of the Union Address, President Bush proposed to increase fuel economy standards (CAFE), and to increase the mandated amount of renewable fuels (ethanol) that had to be blended with gasoline. This “energy security” proposal infuriated conservatives – the Wall Street Journal editorial page trashed us for it all year. The President recognized that, with new Democratic majorities in the House and Senate, he would have to build a different legislative coalition than had worked for him when his own party was in the majority.

The final bill was negotiated via an exchange of letters between the Bush White House and Speaker Pelosi. You can see unanimous Democratic support and Republicans deeply split, especially in the House. As with his unsuccessful immigration reform efforts, President Bush was willing to negotiate a compromise with leaders and even wingers from the other party. 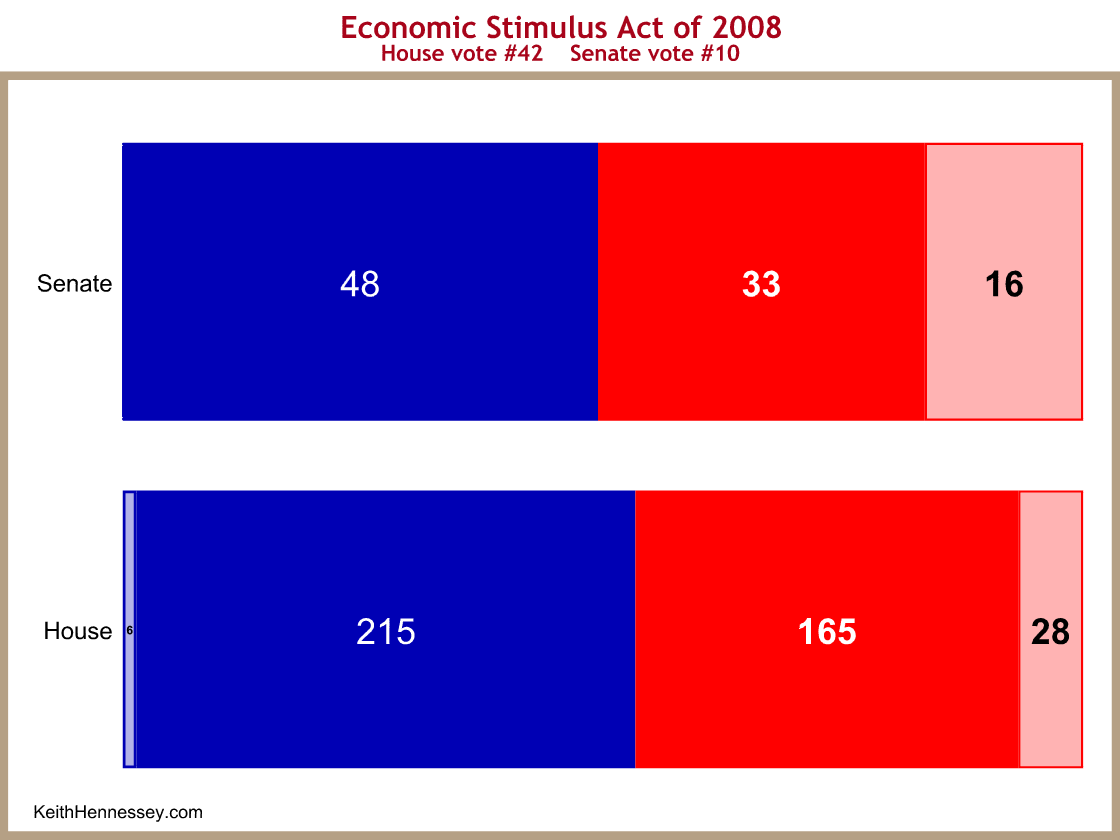 Before announcing his stimulus proposal, President Bush called Speaker Pelosi and Senate Majority Leader Reid to brief them on it. They urged him to propose a broad outline rather than detailed specifics. President Bush agreed to do so.

President Bush hosted a meeting with the bipartisan / bicameral leaders to discuss the stimulus, similar in composition to the upcoming Blair House meeting. That Cabinet Room meeting was unproductive.

Housing reform legislation was stuck for a long time until Fannie Mae and Freddie Mac started to collapse. Then it suddenly broke free. 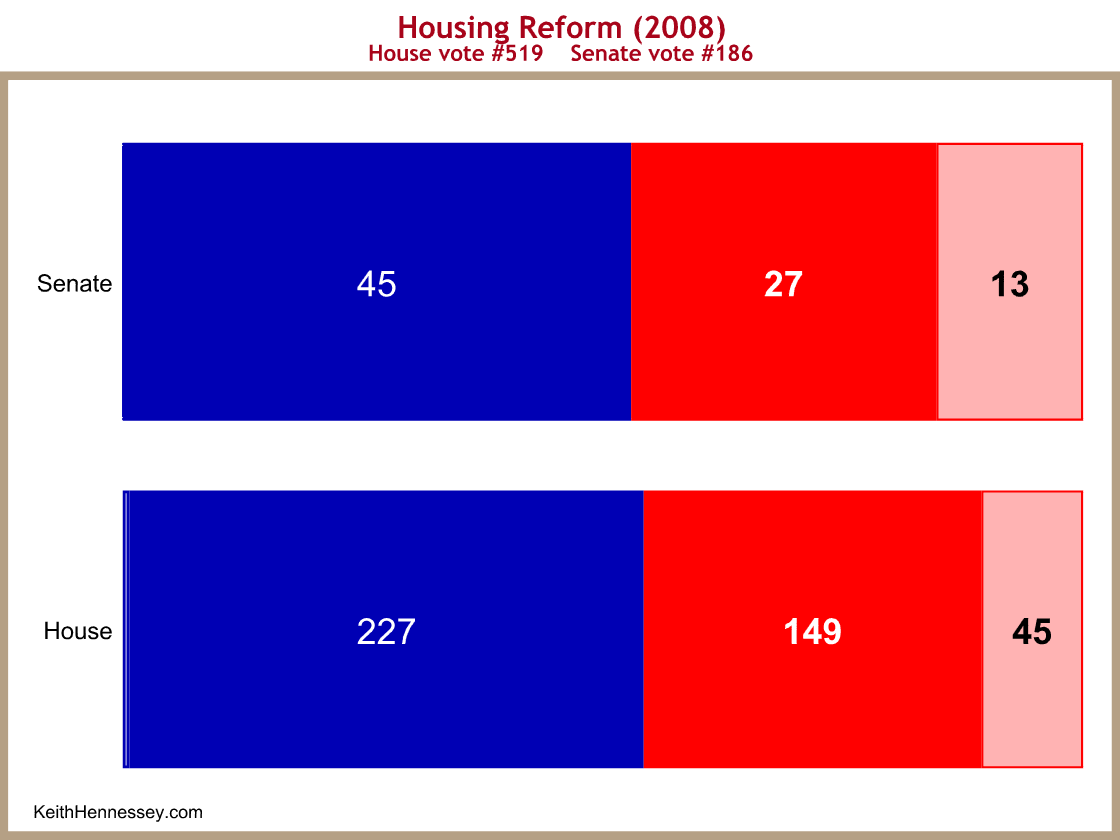 Again you can see the results of negotiations between a Republican President and a Democratic-majority House and Senate. The bill had unanimous Democratic support and a fairly serious split on the Republican side.

Finally we have the TARP. 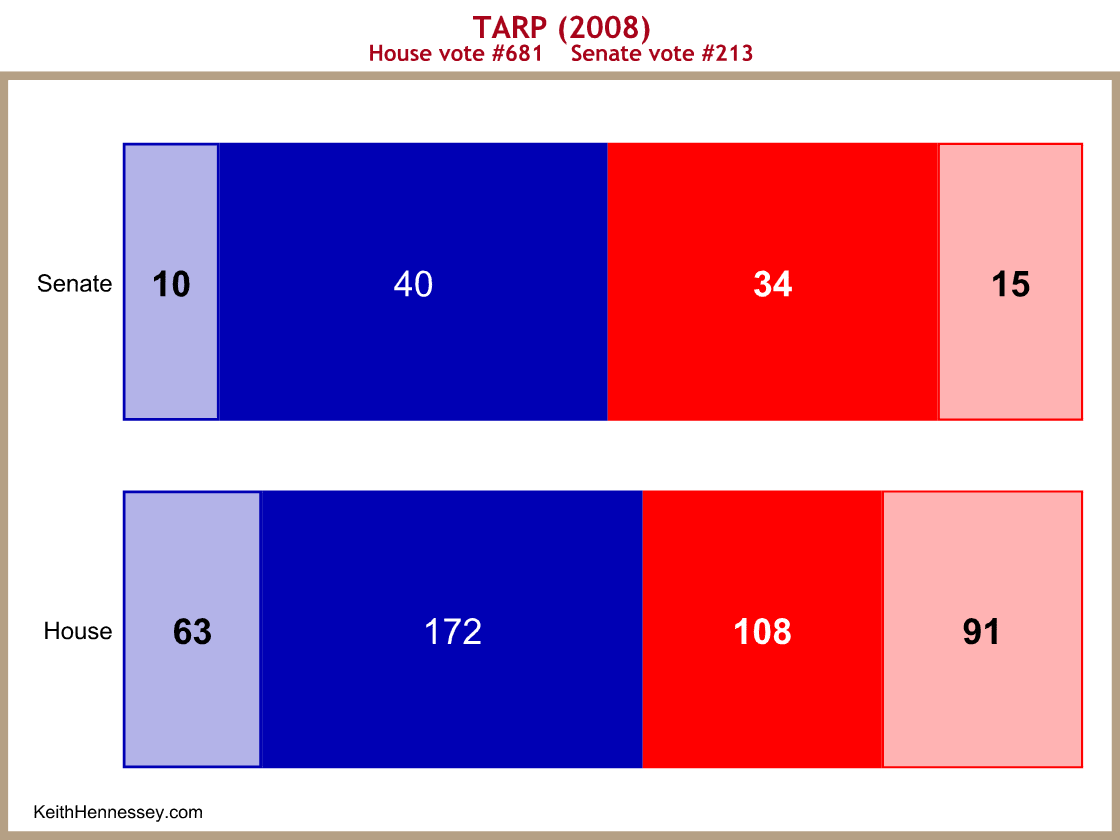 The first version of TARP was negotiated by Secretary Paulson with Democratic and Republican leaders and committee chairmen in an intense and conflict-ridden negotiation. The legislation failed spectacularly on the floor of the House the first time. The President’s team then negotiated by phone with House and Senate leaders of both parties, leading to a few modifications to the original package. The Senate formed a broad center-out coalition to pass the bill easily, which then succeeded the second time around in the House.

You can see broad bipartisan support, as well as significant opposition from both parties. As with the 2007 energy law and the 2008 stimulus, the 2008 TARP was enacted with Democratic majorities in the House and Senate, with leaders from the opposite party working out compromises with a Republican President.

Now we turn to the three big domestic policy issues of President Obama’s tenure so far. We begin with the February 2009 stimulus. 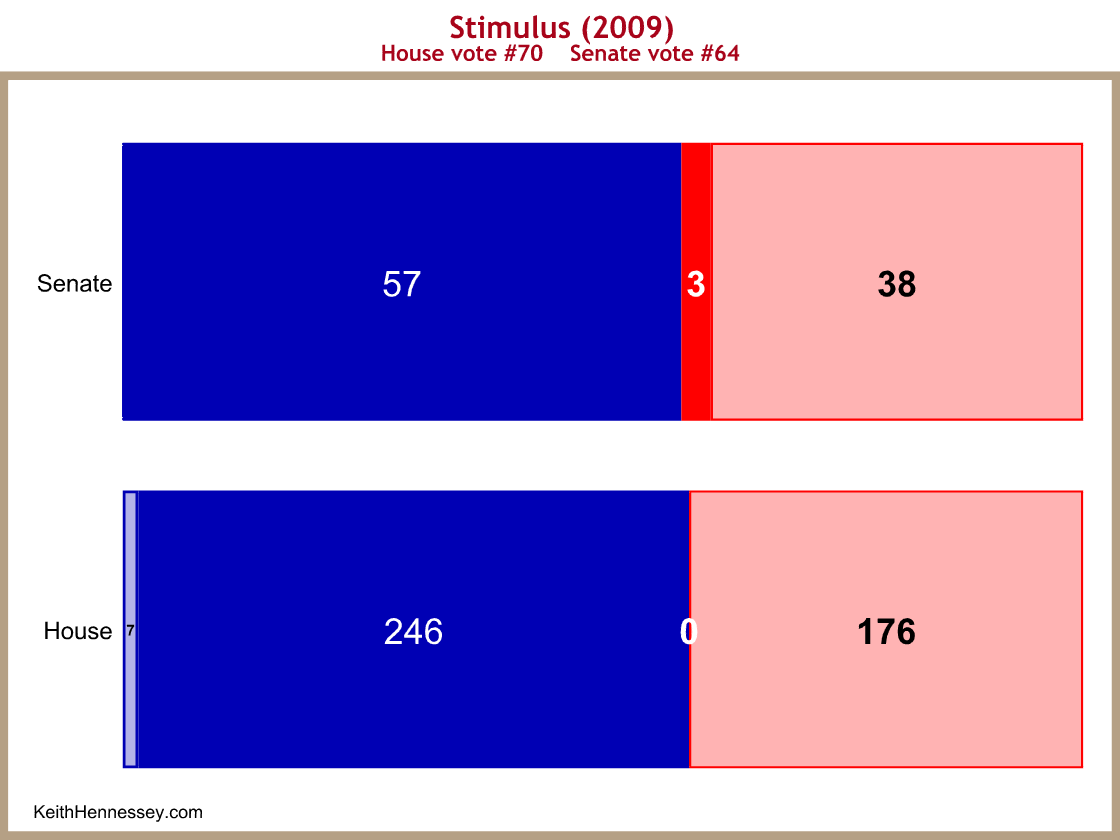 Other than three Senate Republicans, the bill was passed and became law on party line votes. There were no negotiations with Congressional Republicans.

Cap-and-trade is next, but only in the House. 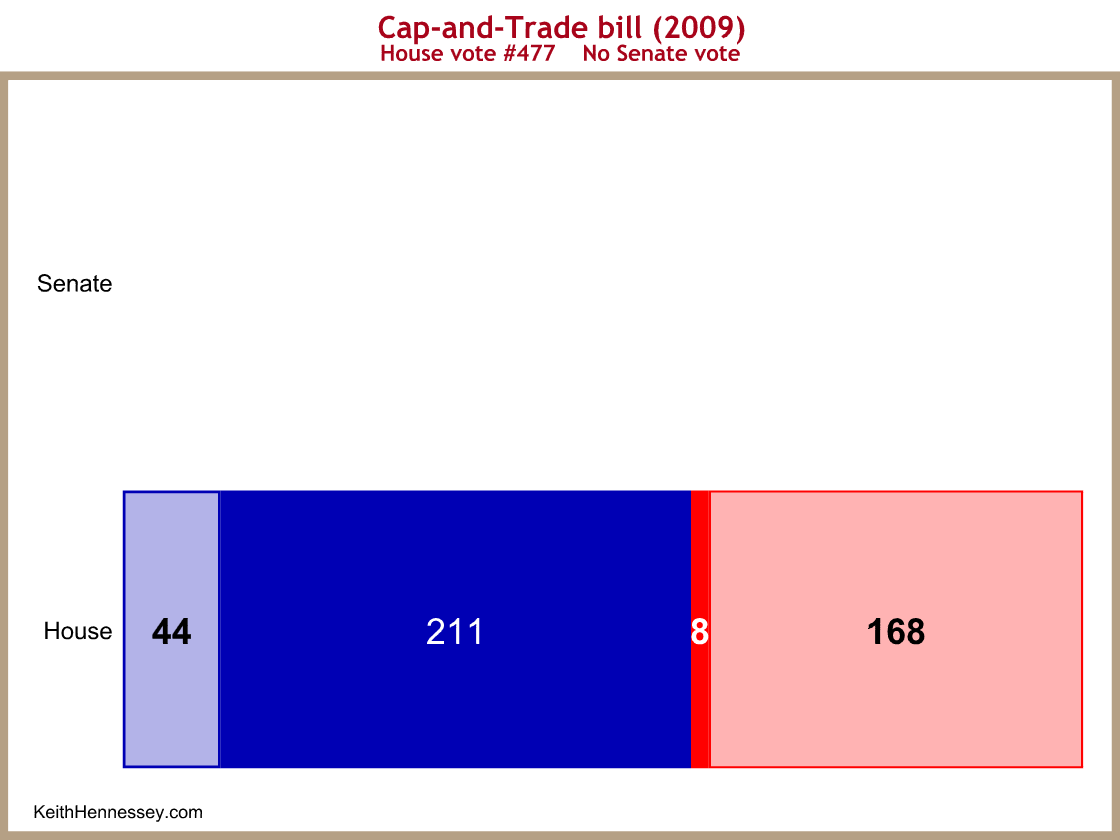 Eight House Republicans voted for the bill, providing Speaker Pelosi with her winning margin. A significant block of Democrats voted no.

We end with the health care bills that are the subject of this Thursday’s meeting. 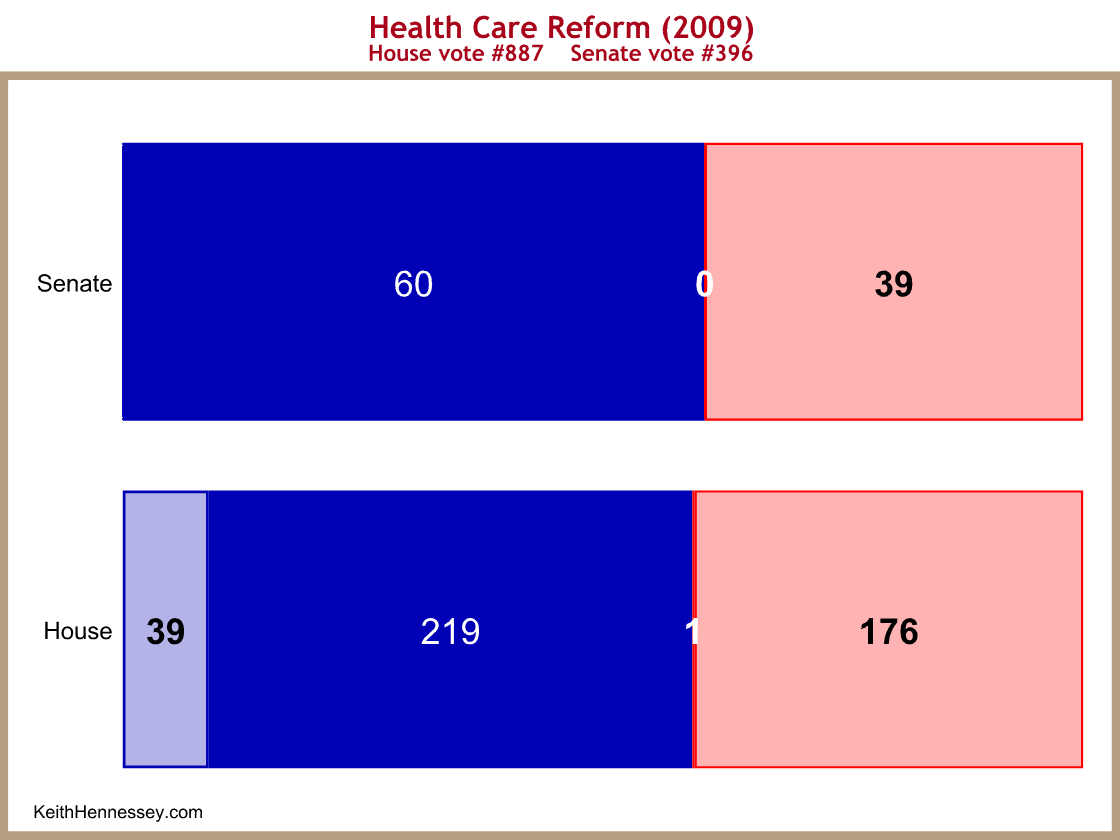 Once again you can see straight partisanship.

In all other cases he had to deal with potential filibusters, occasionally from both sides of the aisle.

In Republican majority Congresses, the winning margin was often provided by Democrats, especially in the Senate.

There are at least four different versions of a bipartisan vote:

Why did Bush succeed at enacting bipartisan legislation?

I assume that some on the Left will say the Republican minority is now far more unified, partisan, and obstinate than the Democratic minority ever was. I think this is silly. Whatever you think of Republicans, they’re not that unified. I’m reminded of the organized crime boss in the movie Sneakers: “Don’t kid yourself. It’s not that organized.”

I believe there are six keys to President Bush’s bipartisan legislative successes:

President Obama needs to learn each of these lessons if he wants to succeed as President Bush did.

If President Obama wants bipartisan legislative success, he could learn a few things from his predecessor.