I want to propose a four-part test for measuring any particular bill on health care cost control.

In each case, I will define the test so that “yes” is a good outcome:

Test 2: The bill significantly reduces the federal deficit in the long run.

I believe our Nation’s long-term fiscal problems, and the problems resulting from the growth of per capita health care spending, are higher priorities to solve than reducing the number of uninsured Americans now. I would rather solve America’s health care cost problems of the future than expand government now. This is my value choice. I expect and accept that others will disagree.

As a result of this value choice, I believe any bill that fails any one of these four tests is fiscally and economically irresponsible, and therefore worth defeating.

There does not have to be a tradeoff. A bill could go after the core policy drivers of health care cost growth, especially the tax exclusion for employer-provided health insurance, and replace it with incentives for individuals to shop for high-value health insurance and high-value health care. Such a bill could meet all of the above tests and significantly reduce the number of uninsured. I will describe such a bill in a future post. Such a bill is not going to be passed by this Congress.

I think the administration would agree with my test. They might define Test 3 to be a subset of Test 2. I think it’s important analytically to separate the two.

In practice the test gets slightly more complex. Test 1, “The bill does not increase the federal deficit in the short run,” breaks down into (1A) “over the next five years” and (1B) “over the next ten years.” The Congressional budget rules require that a bill not increase the federal deficit over the next five years. To his credit, the President and his advisors have also been emphasizing that it is important to meet the same test over the next ten years. From a formal legislative process standpoint, only the five-year window is formally binding, because Congress passed a 5-year budget plan (called a budget resolution). In particular, proponents of a bill will need 60 votes in the Senate for any bill that fails (1A). All other tests can be violated and passed with a simple majority.

I will apply this four-part test framework to each major legislative proposal considered by Congress. I want to begin today by walking briefly through each test.

I would like to make this test more stringent – my personal policy preference would be “The bill reduces the federal deficit in the short run,” especially given the path of expected budget deficits under the President’s budget. The actual test, “does not increase,” is the test in the Congressional budget resolution. It says that at a minimum, any new spending should be offset.

I would also like to make the test apply to federal spending, rather than just the federal budget deficit. I would almost certainly oppose a bill that increases government spending over the next ten years by a few hundred billion dollars, and offsets it with the same amount of tax increases. Again, I’m matching my test to the minimally binding one that Congress will apply to itself. This means that this test for me is one-way: any bill that fails it should be opposed, and some bills that pass it should still be opposed, because they dramatically increase the size of government. Still, for the purpose of this exercise I am applying the looser deficit-based short-term test.

By choosing a looser short-term test than I would prefer, I believe I accomplish two goals:

Test 2: The bill reduces the federal deficit in the long run.

For each of these tests, I’m defining “long run” as more than ten years. That’s an arbitrary breakpoint.

While I’m willing to say I could swallow some bills that do not increase the short-term budget deficit, a bill must significantly reduce the long-run federal deficit to be fiscally responsible. Given that our long-term federal deficit path is unsustainable to the point of national economic collapse, and given that health care cost growth is one of the primary drivers of that deficit path, not making the problem worse is insufficient. A bill must result in dramatic reductions in future budget deficits to be fiscally responsible.

This test interacts with Test 3 in a somewhat subtle way. While Test 1 is a deficit test, the facts of our long-term budget problem mean that Test 2 is driven by Test 3, which is about government spending on health care.

Test 2 is about the long-term budget deficit. Test 3 is about long-term government spending on health care. The President and his budget director are correct when they identify unsustainable per capita health care spending as a primary driver of long-term deficits. (They are incorrect when they identify it as the primary driver of long-term deficits, and dismiss the importance of Social Security spending and aging of the population, as the President did yesterday. I will return to this point in a future post.)

In mid-April I explained that America’s long-term budget problems are driven by unsustainable spending growth, and not by the level of taxation. I think it’s one of my most important posts. I hope you will find time to read it if you have not done so already. Here is the key graph: 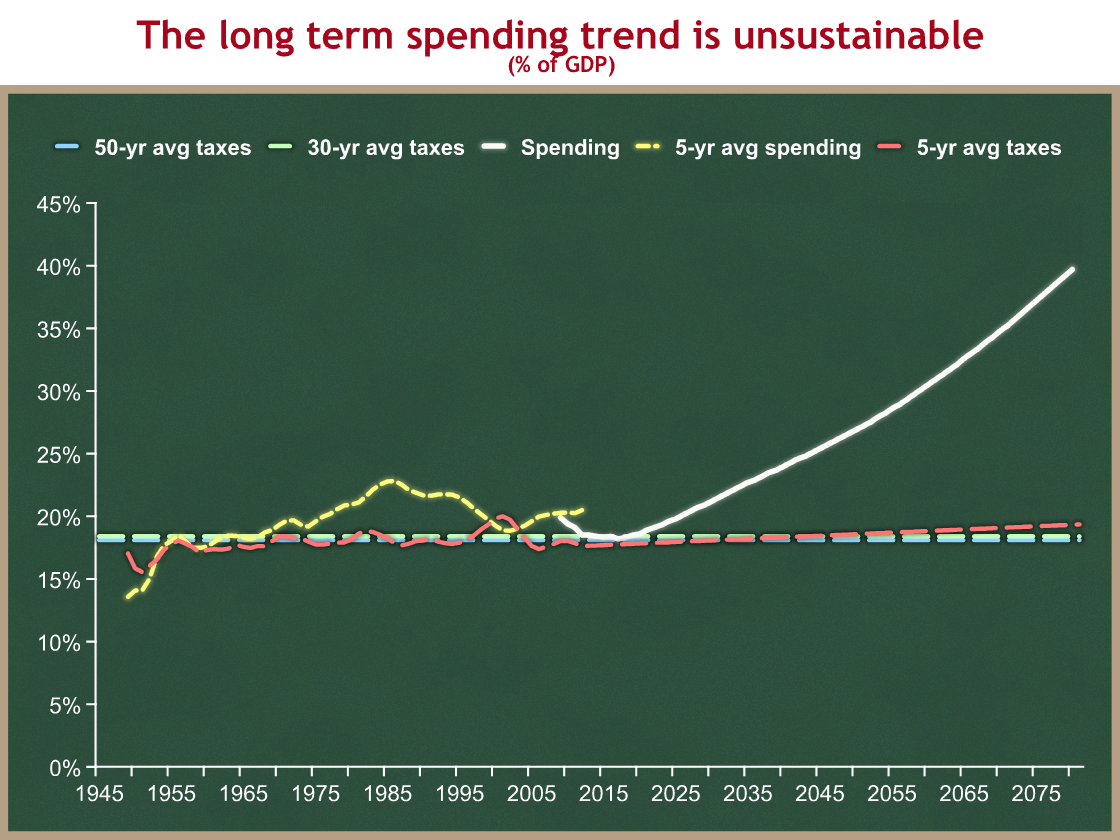 America’s long-term budget problems are driven entirely by the difference between the slope of the white spending line and the dotted tax lines. Over the long run, a constant tax policy always grows as fast as the economy, and so it remains flat on a graph that measures quantities as a share of the economy. So while we can and do debate about the level of the dotted tax lines, they’re always going to be flat.

You can see that any flat tax line cannot keep up with a rapidly growing upwardly sloped white spending line. Even if you were to rais the flat dotted line to 25% of GDP, you would still have a long-term deficit problem because of the slope of the spending line. The key to success is not just lowering federal spending, it’s tilting that white line dramatically downward. This is what the President and his budget director correctly mean when they say we need to bend the (government) cost curve downward. And they deserve praise for identifying federal health care spending as a major driver of that white line’s slope.

To put it graphically:

This last bullet is the President’s stated solution. In effect, he is saying, I’m OK raising long-term federal spending on a new health care entitlement, and thus raising the level of the white line in the long run, as long as we raise the dotted tax lines to offset it in the short-run, and as long as we make other changes to tilt that white line downward (or at least not upward so much.)

The President and his allies have a problem, in that their specific policy of expanding pre-paid health insurance to tens of millions of uninsured Americans will instead increase the slope of the white spending line. The academic evidence is clear that as third-party payment for health care increases, sensitivity to cost decreases and health care spending (total and governmental) increases. Creating a new entitlement for the uninsured helps the uninsured. But it worsens our long-term budget problem in two ways: it raises the level of the long-term spending line, and it increases its slope. Both exacerbate an already-devastating long-term federal budget picture.

So for the President to meet his stated goal, and to make any significant progress on our long-term budgetary problems, the rest of the bill must not only bend the spending line downward, it must do so by more than these two factors that raise the white line by creating a new health care entitlement. I think it’s a mistake to make your most serious problem worse before trying to solve it.

The President correctly identifies this problem. He admirably says it is a condition that must be met by health care legislation. Unfortunately, he has made no specific policy proposals that would achieve this goal. The President and his budget director emphasize policies that would provide private sector consumers with better information about the health care they use. They have proposed policies that would change government spending policies. They have proposed no policies that would change incentives for private consumers of health care. (I wrote about this in April.) Without such policies, you cannot meet Test 3 or Test 4. And without such policies, expanding government entitlement spending is horribly irresponsible in the long run.